Many songs in the Eighties carried a message or told a story, even if it wasn’t immediately obvious or fitting to the music. Nik Kershaw’s “I Won’t Let The Sun Go Down On Me” was about the threat of nuclear war, although you could be forgiven for not making a connection between the subject matter and its synth pop accompaniment. In some cases, the meaning of a song’s lyrics has only become apparent years later. As I was only 9 years old when The Vapors released “Turning Japanese” in 1980, it was at least a decade before I came to realise the alleged story behind the song!

The Seventies saw a lyrical dearth, which only ended with the advent of Punk, but the Sixties set the bar for storytelling lyrics. That is one of the reasons I love listening to Radio 2’s “Sounds of the Sixties” show, on a Saturday morning.

Last week, as Brian Matthew introduced the track “Sunny” by Bobby Hebb, he relayed the sad tale of how the song had come to be written. Harold “Hal” Hebb, Bobby’s older brother by six years, had been murdered in a mugging 48 hours prior to writing it, the song being an outpouring of Bobby’s grief.

Listening to the song, knowing the circumstances in which it had been created, was like hearing a brand new song, both in the lyrics and in the emotion of the vocal. What do you think?

Tomorrow sees the start of the World Snooker Championships at Sheffield’s Crucible Theatre, and Mark Selby’s defence of his title. With the likes of Neil Robertson, Judd Trump and Ronnie O’Sullivan taking part in the tournament, we will undoubtedly witness some top class play. Can it ever match that of snooker’s golden age though?

Thirty years ago, the tournament’s final saw 18.5 million viewers tune in to watch Dennis Taylor beat defending champion Steve Davis in the “black ball final”. Jobs and school were pushed to the back of our minds, as the nation sat glued to their TV sets, awaiting the result of a match that eventually finished in the early hours of Monday 28th April, 1985.

My favourite snooker player of the decade was, and still is, fellow left-hander, Jimmy “The Whirlwind” White. I first remember watching him play on TV when I was 9 years old. My Nan (who was also left-handed) loved to see him play, and we would spend hours together, watching his expert performances and celebrating his championing of “cack-handedness”! 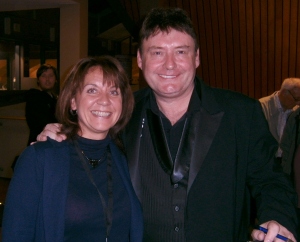 Alongside other 80’s snooker greats like Stephen Hendry, Joe Johnson, Willie Thorne and Cliff Thorburn, Jimmy was one of the competitors to play in the World Seniors Snooker Championship a couple of years ago. He was also one of the players I got to meet afterwards. Now, I have met a few well-known faces, but I have never been as starstruck as when I met Jimmy White. After the above photo was taken, I took a photo of my son with The Whirlwind. As I struggled to keep the camera steady, I realised my hands were actually shaking, and I felt a little bit giddy! 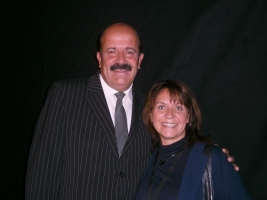 in the Matchroom Mob’s video below. However, as the song has been my ear-worm for the last 24 hours, I thought  I would share it with you (I’m good like that!). You will see too that Willie Thorne doesn’t look any different now than he did back then. Besides, you can’t beat a bit of Chas ‘n’ Dave!

To name your favourite song of an entire decade is no easy task. When that decade is the Eighties, the decision becomes even harder as we were, at times, spoilt for choice. For me, the summer of 1984 was the pinnacle of the Eighties. With Frankie Goes To Hollywood topping the charts, and acts like Grandmaster Flash and Melle Mel rubbing well-padded shoulders with Nik Kershaw; as well as OMD talking loud and clear alongside Echo & The Bunnymen, music was at a diverse high. The summer of ’84 was also my first summer as a teenager, and evokes memories of lazy, sunny days at the beach, and trips to Dreamland in Margate, when it could still boast to have the biggest Big Wheel in Europe. It was also a time when I began to write prolifically. 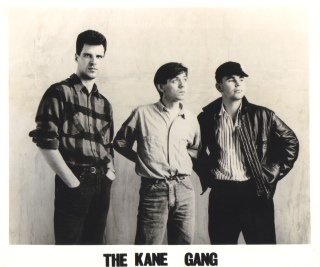 For all that associated nostalgia, but more importantly because it is an amazing, soulful track, my all time favourite song of the Eighties is “Closest Thing To Heaven” by The Kane Gang. Peaking at number 12, the song spent 8 weeks in the UK Top 40. During that time, I wrote to the band, asking what were their favourite Soap Operas (I like to think my interview questions have improved slightly since then!). Despite being at the height of their success, and having overloaded, hectic schedules at the time, a few weeks later I received the above publicity photo, along with a handwritten reply from band member, Dave Brewis. For those of you desperate to know what their favourite soaps were in the Eighties, the letter will appear in my next book, as will the answers to a number of questions I was able to put to Dave a couple of weeks ago.

One thing that did emerge from my recent quizzing, and something I’d like to share with you now, is the band’s current status. The band reformed last September, for a one-off charity performance at Dave and Martin’s old school, Northlea in Seaham. The following month, a 3 CD edition of “The Bad & Lowdown World of The Kane Gang”, featuring demos, remixes and live performances, in addition to the 1985 album, was released. However, with all three band members working full time individually within the music and media industries, there are no current plans for any more live performances by the band. I am sure I’m not alone in feeling disappointed at being denied the opportunity to listen to their blue-eyed soul first hand, so I have a cunning plan…Maybe, just maybe, if The Kane Gang get enough “Likes” on Facebook and followers on Twitter (@TheKaneGang), they will be persuaded to give us another gig or two?

For now, to remind you just how good they sound, and because I need no excuse to play this track, here is “The Closest Thing To Heaven”.

Regular readers of my blog will know that I am currently writing my next book, “Your Eighties”. As the title suggests, the book centres around your recollections of the Eighties, and features interviews with some of your favourite musicians and personalities of the decade.

The stories and memories sent to me have been both interesting and entertaining, mostly happy, sometimes sad, but always capturing the spirit and essence of the time. Yet, there is still room for more of your fantastic thoughts, and that’s where you come in.

Whether it is your favourite TV programme or music, your first car or your first love, your biggest fashion faux pas or your biggest hairdo, if it happened in the 80s, I want to hear about it. It doesn’t matter if it’s a few words or a few pages, you can send them to me via my website.

This PDF gives a few ideas to help dust away the cobwebs from your memory, and take you back to the Eighties. I look forward to hearing from you.