As I write this, I am listening to The Boomtown Rats’ self-titled first, and in my opinion their best, album. Although it was released in 1977, I bought my copy in 1982 (aged 11) around the time that Mr. Geldof and a certain presenter of The Tube moved to my home town. As Bob and Paula became familiar faces around town, The Rats’ music became a firm favourite in my vinyl collection, with “A Tonic For The Troops” (released in 1978) soon coming a very close second to my favourite Rats’ album.

Despite living within swearing distance of the Irish punk rocker, I had never seen him perform live. Until this weekend. I had booked my tickets for Rewind South before the line up had been announced. With more than twenty acts from the Eighties performing, I knew I would have a great time regardless of who would be appearing. You have no idea of the sheer delight I felt when I discovered The Rats would be playing. I had waited over thirty years for this!

I made my way through the crowds in plenty of time to secure a place a couple of rows back from the stage, where, in spite of my lack of height (I’m 5′ 1″) I had a great view. As Bob and the rest of the band (Pete Briquette on bass, Garry Roberts on guitar, and Simon Crowe on drums) took to the stage, I had a moment of doubt as to what they would play. Their best music, and indeed their hits, had all been in the Seventies. There was no brass section, so it was unlikely they would play the rather brilliant “Drag Me Down”, from their 1984 album “In The Long Grass”. I needn’t have worried. 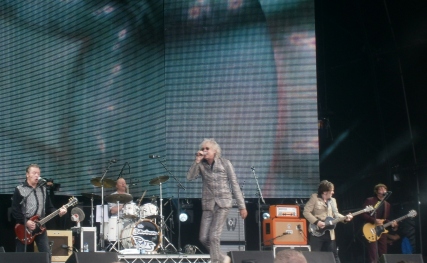 Alongside crowd-pleasers like “Someone’s Looking At You” and “Rat Trap”, early Rats’ tracks such as “Lookin’ After No. 1”, “She’s So Modern” and “Like Clockwork” were performed with an energy and fervour evocative of the band’s punk roots. When Bob sang “Mary Of The 4th Form”, he was again the angry young front man, not somebody’s granddad. However, no one was in any doubt of his status as a family man, during his performance of “I Don’t Like Mondays”. His pensive pause, following his delivery of the line “And the lesson today is how to die” was heartbreakingly emotional. Shouts of “We love you, Bob” soon erupted from the crowd, a display of support en masse. I wasn’t the only one to shed a tear then.

As proceedings were brought to a close with the recently penned “The Boomtown Rats”, I was both elated, that the performance had by far exceeded my expectations, but sad too that it was coming to an end. It had been wishful thinking that my favourite track, “I Can Make It If You Can”, would be performed. Admittedly, it is better suited to being played in some dark, smoky bar than on a sunny stage in Henley-on-Thames, but I would have still been swaying with my arms in the air! Similarly, I had hoped they would play “I Never Loved Eva Braun” – in fact The Rats’ first two albums in their entirety would have been great. As it was, I loved every single minute of the performance, and will be booking tickets to another of their gigs soon. I can’t wait to go back to Boomtown again.