One of my treasured discoveries from Operation Declutter has been this Adam Ant exercise book. It was part of an Adam Ant stationery set I bought in 1981, which also included a notebook, ruler, pencil sharpener and rubber. I’m proud to say I still have all of these, as well as a matching Adam Ant scrapbook.

The scrapbook makes an appearance in the Sky Arts programme I filmed back in February, due to be aired in September, and holds a wealth of clippings from the early Eighties. However, apart from being defaced by my scrawl on the front (done to confirm my ownership) the above book is pristine, as is the notebook.  The rubber is still in its cellophane wrapping, such was my obsession with all things Adam.

Then, there was the music. The first single I ever bought was ‘Stand & Deliver’. I can still remember the excitement of being 10 years old, and going to Woolworths on a Saturday morning to buy it. It was to be the first of many, and thanks to an older boy at primary school, who knew all there was to know about the Dandy Highwayman, I found myself seeking out his back catalogue, and discovering Mr. Goddard’s earlier offerings. I was hooked.

Little wonder then that Saturday night, when I saw Adam & The Ants perform at the Brighton Centre, will remain a life highlight for me. Met with rapturous applause as he came on stage, and launching straight into ‘Dog Eat Dog’, Adam performed the ‘Kings of The Wild Frontier’ album in its glorious entirety. Thirty five years faded away as the Burundi Beat blasted through me, and I lost myself in the music and the performance of an often underrated pioneer.

Lasting almost two hours, the set included both of the band’s Number 1 singles as well as Adam’s solo chart topper ‘Goody Two Shoes’. Other solo offerings to make the show were ‘Desperate Not Serious’ and ‘Vive Le Rock’, but unfortunately not ‘Friend or Foe’, a favourite of mine. However, my forgiveness was swiftly forthcoming as the omission made room for early tracks such as ‘Zerox’, ‘Never Trust A Man (With Egg on His Face)’ and ‘Cartrouble’ to be 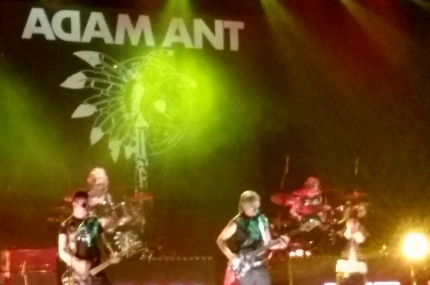 played. As the singer told us the latter was written with his childhood trips to Kent in mind, I found myself letting out a loud cheer, the idea of him visiting my county being far too much!

All too soon (although my knees would beg to differ, having taken a non-stop pounding throughout the gig), it was time to go. With just a handful of photos on my mobile – I was too busy enjoying the gig to snap away – but a mind full of memories, I made my way out of the venue, with a huge smile on my face and the knowledge that Adam Ant (still) rocks!