As I work to meet a writing deadline, I have been a bit quiet on my blog recently. However, I had to take five minutes out to post about Grandmaster Flash’s DJ set on Saturday night, at Dreamland, Margate.

We arrived about 15 minutes before the hip-hop pioneer was due on stage, and quickly made our to the middle of the gathering crowd, to shield us from the cold wind blowing in from the East Kent coast. People standing ahead of us began to drift away for one reason or another, and by the time the DJ stepped onto the stage, I found myself stood at the front, just feet away from where he would work his magic.

During the summer of 1984, my first summer as a teenager, I had spent countless hours at Dreamland. I can vividly remember one sunny afternoon, flying through the air on the Umbrellas as “White Lines” b

y Grandmaster Flash and Melle Mel blasted out of the operator’s kiosk. To be back there, standing feet away from the American Rapper as he played and sang along to the track was pretty special. It was only surpassed by his special farewell to me. As he stepped off the podium to exit the stage, I caught Flash’s eye and held out my arms in a congratulatory gesture. He strode towards me and grabbed both my hands, as I told him how fantastic his set had been. I was definitely in the ‘fan zone’ by this point, and unaware of the 7,000 strong crowd behind me surging forward to get close to the Master, until I almost face-planted on the stage, under the force!

Luckily,  I survived unscathed and can share this with you. Enjoy…

Growing up in East Kent during the 80s meant many a summer’s day spent at Margate’s Dreamland, or Bembom Brothers Amusement Park,

as it was known for the latter half of the decade. Catching the train from Faversham, and picking up friends in Whitstable and Herne Bay en route, we would arrive as the park gates opened at 10am, and stay until the sun went down and the fairground lights illuminated our screams and laughter.

A lot of the 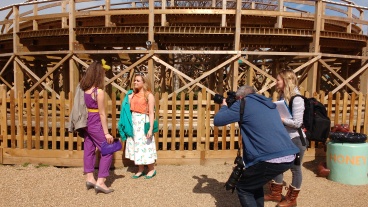 rides from those halcyon days, such as the Looping Star, Mary Rose, Cyclone and the Water Chute, have long since departed the coastal town. However, firm favourites like the Scenic Railway, Big Wheel and Enterprise continue to stand proudly and operate in the park, since the its re-launch last year. You can imagine how excited I was when Dreamland agreed not only to let me undertake an 80’s photoshoot there, but allowed us to go on the rides too! So, as our photographer set to work with models Sophie and Robyn, I couldn’t resist giving the Scenic Railway a ‘test ride’, along with Deborah Ellis of Madam Popoff Vintage Emporium, our wardrobe stylist.

for a photo story which will appear in a publication I have coming out later this year, and I marvelled as I watched my the story I had written come to life. Yes, the storyline may have been cheesy, but seeing as we had travelled back to 1984 for the day, it was apt.

When writing the story, I had integrated the rides and park features to the extent that removing them would have involved completely re-writing the plot. I had also worked on the assumption that everyone loved fairground rides as much as I do. Oops!

Fortunately, both photographer and model overcame their fear of going on the Big Wheel, in order for the storyline to progress as planned. Similarly, Mason, one of ou

r male models managed to stay upright in his roller boats long enough for us to get the shots we needed, without being knocked over by the speeding kids in the roller rink. I never entertained the possibility of a non-skater, when I wrote the story!

So, a few lessons learned and some top class work from everyone involved, and we ended up with the perfect shots, not to mention having a lot a fun in the process. I can’t wait to see the final published result.

Huge thanks to Dreamland for letting us have free reign in an iconic landmark, which holds a special place in my heart.  A big thank you too to models Sophie, Robyn, Oli and Mason, photographer Alan Langley and his assistant, Olivia, make-up and hair stylists Nina Gregory and Hayley Edwards, and to Madam Popoff herself, Deborah Ellis.

I look forward to joining Deborah at her Retro Party on 30th April, where I will be signing copies of ‘Your Eighties’ from 3pm to 5pm, alongside Punk Poet Garry Johnson and Bob Bradbury, lead singer of Hello. I hope to see some of you there. 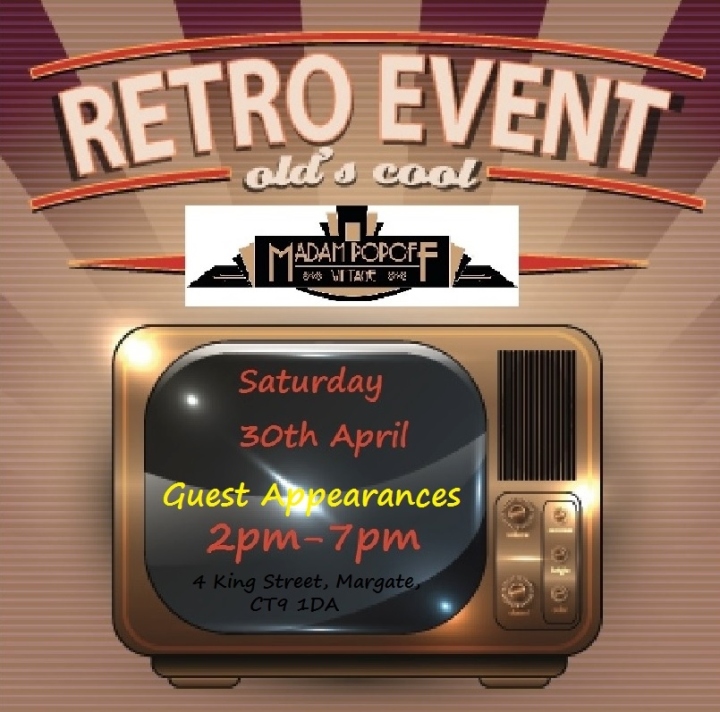 As a teenager, I loved going to Margate. Half an hour’s train ride from my home town of Faversham, the summer holidays would see me at the seaside town as often as I could. Long, sunny days spent at Dreamland (or Bembom Brothers, as it became during the 80s), an ice cream on the sandy beach, and buying cheap sunglasses and t-shirts from the souvenir shops in Arlington Square are forever etched in my memory.

Margate may have changed in the last three decades, but with the renovation and re-opening of Dreamland last year, some fantastic artwork on display at the Turner Contemporary (Grayson Perry’s ‘Provincial Punk’ exhibition last summer was incredible), and an ever-expanding Vintage Quarter to peruse, that change is for the better.

I have been invited to attend a Retro Event at one of the vintage stores thriving in this area of Margate, and will be signing copies of ‘Your Eighties’ from 2-4pm at Madam Popoff, on Saturday 30th April.

However, I plan to be there most of the day to meet the celebrity guests who will making appearances throughout the day. I am also looking forward to meeting up with my fellow New Haven Publishing author, Garry Johnson, who will be signing copies of his book ‘Punk Rock Stories and Tabloid Tales’, and with Bob Bradbury from Glam Rock band Hello, who will be signing copies of his first solo CD album ‘Mad Affair’. Full guest list and timings will be announced nearer to the event, but it plans to be a fabulous afternoon for anyone with an interest in all things retro and vintage, with clothes and accessories from the 1940s onwards available for purchase.

Entry is free, so come along and join in the fun – I look forward to seeing you there!

To name your favourite song of an entire decade is no easy task. When that decade is the Eighties, the decision becomes even harder as we were, at times, spoilt for choice. For me, the summer of 1984 was the pinnacle of the Eighties. With Frankie Goes To Hollywood topping the charts, and acts like Grandmaster Flash and Melle Mel rubbing well-padded shoulders with Nik Kershaw; as well as OMD talking loud and clear alongside Echo & The Bunnymen, music was at a diverse high. The summer of ’84 was also my first summer as a teenager, and evokes memories of lazy, sunny days at the beach, and trips to Dreamland in Margate, when it could still boast to have the biggest Big Wheel in Europe. It was also a time when I began to write prolifically.

For all that associated nostalgia, but more importantly because it is an amazing, soulful track, my all time favourite song of the Eighties is “Closest Thing To Heaven” by The Kane Gang. Peaking at number 12, the song spent 8 weeks in the UK Top 40. During that time, I wrote to the band, asking what were their favourite Soap Operas (I like to think my interview questions have improved slightly since then!). Despite being at the height of their success, and having overloaded, hectic schedules at the time, a few weeks later I received the above publicity photo, along with a handwritten reply from band member, Dave Brewis. For those of you desperate to know what their favourite soaps were in the Eighties, the letter will appear in my next book, as will the answers to a number of questions I was able to put to Dave a couple of weeks ago.

One thing that did emerge from my recent quizzing, and something I’d like to share with you now, is the band’s current status. The band reformed last September, for a one-off charity performance at Dave and Martin’s old school, Northlea in Seaham. The following month, a 3 CD edition of “The Bad & Lowdown World of The Kane Gang”, featuring demos, remixes and live performances, in addition to the 1985 album, was released. However, with all three band members working full time individually within the music and media industries, there are no current plans for any more live performances by the band. I am sure I’m not alone in feeling disappointed at being denied the opportunity to listen to their blue-eyed soul first hand, so I have a cunning plan…Maybe, just maybe, if The Kane Gang get enough “Likes” on Facebook and followers on Twitter (@TheKaneGang), they will be persuaded to give us another gig or two?

For now, to remind you just how good they sound, and because I need no excuse to play this track, here is “The Closest Thing To Heaven”.