The reality of what I am writing has yet to sink in. Emotions of disbelief and sadness are overwhelming as I type what I have been unable to voice. On Friday 22nd May 2015, actor, artist, and the loveliest man anyone could ever hope to meet, Terry Sue-Patt was found dead at his home is East London.

Remembered by a generation as Benny Green, the first Grange Hill pupil to eve

r grace our television screens, Terry was also an incredibly talented artist, working under the name TSP Hoodie. The photo shows the pair of us holding one of his pieces which, I am proud to say, has hung in my hallway for the last couple of years. It is the last thing I see at night, as I close my bedroom door, and the first thing I notice as I make my way, bleary eyed, downstairs each morning. Guaranteed to always put a smile on my face, the painting continues to do what Terry always did.

Ask anyone who ever met Terry what he was like, and the words “beautiful”, “fun” and “cheeky” are repeated time and time again. His fellow Grange Hill cast member and close friend, Erkan Mustafa commented yesterday “he loved everybody that he met”. As his many friends and family all know, everybody he met also loved him. Whether you had known him for years or hours, Terry’s warmth and generosity of spirit became a part of your life that you never forgot. Paul McCarthy, who played Tommy Watson alongside Terry in Grange Hill, captures his nature perfectly: “He was a very special man, with no malice or agenda, just a kind soul.”

Despite his early TV appearances and exposure to public scrutiny, like many former pupils of Anna Scher, Terry remained with his feet firmly on the ground, untainted by the superficiality of the entertainment industry. He was even susceptible to moments of being almost starstruck himself. About six months ago, an old episode of Pointless, in which my daughter and I had appeared as contestants, was repeated. The first I knew of it was a text from Terry asking “Is that you on the telly? If it’s not, you’ve got a double!” When I confirmed that it was me, Terry managed to turn what should have been my fifteen minutes of fame into “Hollywood Star” treatment, thanks to his now infamous Facebook “shout outs”. By the time my second episode aired the following day, I felt like I had most of Walthamstow behind us, willing us to win. Unfortunately, the outcome was still that we went out in the second round, due to my incorrect answer to a football question, something my staunch Spurs supporter friend found both unbelievable and hilarious!

We may have differed in our football knowledge, but we shared a love for S.E. Hinton’s book, “The Outsiders”. I had first read the book as an impressionable teenager, and have lost count of how many times I have read it since. Discovering the book later in life, Terry not only enjoyed this tale of true friendship, but found the characters engaging in a way that helped him with his own struggles. Knowing how much I love the book, Terry sent me his copy a few weeks ago, along with a note saying that he would have sent it sooner, but “it was so good I read it twice.”

One of the most poignant moments in the book centres around a poem by Robert Frost. I can think of no better way of saying goodbye to a friend who was taken from us too soon, than with the words he loved to read. Terry, you will forever stay gold. 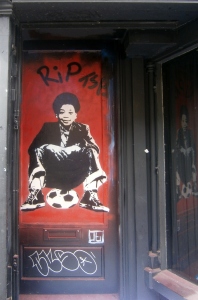 One of the tributes painted yesterday by Tee Wat. This one is at Monty’s in Brick Lane, Terry’s favourite bar.

“Nothing Gold Can Stay”

Her hardest hue to hold.

Her early leaf’s a flower;

But only so an hour.

Then leaf subsides to leaf.

So Eden sank to grief,

So dawn goes down to day.

Nothing gold can stay.