Back in the summer, I spent  a week in Looe, Cornwall and I fell in love with the place. We didn’t have the best of weather. The average temperature was ten degrees lower than my native Kent I’d left behind, and we had rain and fog on 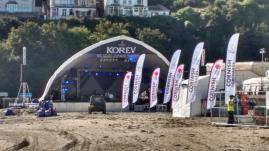 a couple of days. Yet, offering the friendliest of welcomes and boasting picture postcard views, not to mention a bountiful supply of crab, pasties and cream teas, this beautiful Cornish town won me over. I could not wait to return at the end of September, to cover the Looe Music Festival.

I did consider the possibility that, with thousands of music lovers descending upon Looe, the town I remembered may not be the one I would be greeted with a couple of months later. However, that fear was soon allayed on Friday morning as I watched the final preparations being made for the first night of the festival. In addition to the main stage, which is situated on the town’s golden, sandy beach, there are a number of venues located throughout the town, hosting the 90 acts playing over the three days. Experience combined with necessity means the festival management and its team run as a finely honed machine, to ensure events run smoothly, on time and, most importantly, enjoyably. 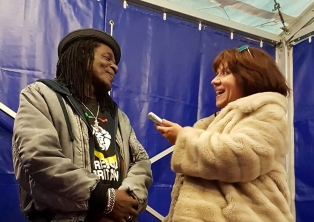 With so much to choose from, it was inevitable that some clashes arose, as was the case on Friday night. The following day, a number of people told me how good Ferocious Dog had been when they performed  on the main stage. However, I hadn’t made it down to the beach until the evening’s headliner, Wilko Johnson, made his appearance. He far exceeded any expectations I had, and seeing his live performance of  “Roxette” is a memory I will cherish.

The reason I had not made it to the main stage until the former Dr. Feelgood guitarist was giving it his all was due to my penchant for 80’s music and ska. The Ne 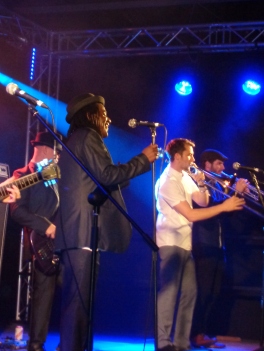 ville Staple Band were performing in the Champion Marquee, so it was obvious where I was going to be. Add to that the opportunity to interview the Original Rude Boy himself, and it was a complete no-brainer.

The band’s performance, despite a few technical hitches, went down a storm with the crowd. A real highlight for me was dancing (I hesitate to call the moves I made skanking!) to Concrete Jungle, just feet away from the band. I should also mention that the backing vocals from keyboard player Joe Atkinson, on Ghost Town, need to heard to be believed.  As close to the original recording as you could ever hope to hear.

On Saturday, I was determined to experience as many of the variety of acts as possible, and immerse myself in the musical diversity on offer. I made a good start when I went to watch Bideford Pies and Drams at Portbyhan Hotel in West Looe. They began with songs traditionally associated with the bagpipes, such as Amazing Grace, and I thought they were joking when they asked if anyone had any requests. The next thing I knew, I was listening to a somewhat different, but splendid, version of Queen’s We Will Rock You. It perfectly set the tone for the most brilliantly eclectic day of music I could ever imagine.

En route to the main stage, we encountered a number of talented street musicians, some of them playing by the Busk Stops scattered throughout the town. You will be pleased to learn that I refrained from inflicting my own vocal talents on passers by, when I found a vacant stop!

Billed as having not “only ‘white hot’metal blood running through their veins [but] a passion of the most intense kind in never ending abundance,” local band King Creature had me intrigued before they had even set foot on the stage. 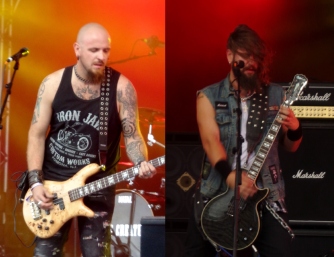 After powering their way through ‘Dead Inside’ the Cornish rockers, comprising of lead singer/bass player Dave Kellaway, drummer Jack Bassett and guitarists Matt Karl Vincent and Dave Evans, had me hooked.  Pure, unadulterated rock played loud, raw and fast, with the obligatory power ballad ‘Can You Forgive Me?’ the jewel in King Creature’s crown, their set was not only high-octane and dynamic but irresistibly seductive. Needless to say, they have a new fan in me. 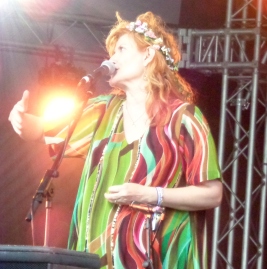 In stark contrast, the next act to take to the beach-side stage was Scottish singer and song writer Eddi Reader. The former lead singer with Fairground Attraction appeared almost ethereal as the breeze blew in off the sea,  and sang “The Patience of Angels” – a truly heavenly experience. Delighting us with little anecdotes in between favourites such as ‘Perfect’and ‘Find My Love’, the flame-haired songstress was as entertaining as she was talented. A totally feel good performance.

A divergence in musical styles again, Hersham boys Sham 69 were next to play. I loved the incongruity of me sipping Prosecco as I sang along to tracks like “If The Kids Are United” and “Hurry Up Harry”. Although I wasn’t quite so enamoured with the decline in weather, as the band came to the end of their performance. Taking refuge in the nearby Boscarn pub as the rain came shooting down, I only heard snippets of Seth Lakeman’s set on the few occasions when I stuc 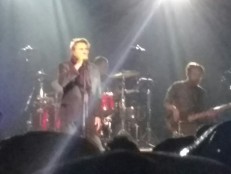 k my head out to check if the weather had improved.

It was still bucketing it down five minutes before Bryan Ferry was due on stage at 9pm. However, determined to see the former Roxy Music frontman perform on the eve of his 71st birthday, we made our way onto the sodden sands. By the time he emerged, 40 minutes later than scheduled, I thought I had reached saturation point. I was wrong. After only three songs, two of which were 80’s hits ‘Slave To Love’ and ‘Don’t Stop The Dance’, we became part of a mass exodus from the beach, as torrential rain flooded the streets of Looe and put paid to any notions I had of watching that night’s performance until the end.

Waking up on Sunday morning, a pile of soggy clothes and hair like Robert Smith’s were the only reminders I had of the previous night’s drenching, as the sun shone brightly in the cloudless, blue sky. Arriving back at the main stage around lunchtime, shortly after Alex Hart had begun singing, I sat down with a little beach picnic of freshly made Looe crab sandwich and a glass of Prosecco (there’s a bit of a theme going here!), as the autumn sun beat down on my face. This was my kind of festival. 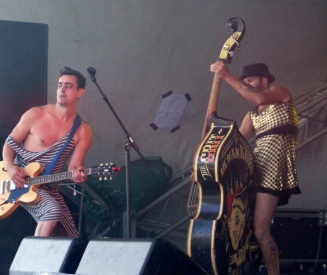 The day got even better when 80’s psychobilly band King Kurt took to the stage later that afternoon. Slightly tamer than their gigs of three decades ago – thankfully, there were no cat entrails to dodge or haircuts given to the crowd mid-set – it was still one of my favourite performances of the weekend. I found myself grinning from ear to ear as they brought us tracks like ‘Zulu Beat’, ‘Do The Rat’ as well as their 1983 Top 40 single ‘Destination Zululand’, and was not alone in singing “Ooh wallah wallah” for a considerable time afterwards.

I returned to the main stage for Sunday’s headline act, Fun Lovin’ Criminals. Fronted by the incredibly cool Huey Morgan, they did not disappoint as they delivered UK Top 30 hits ‘Scooby Snacks’, ‘King of New York’ and ‘The Fun Lovin’ Criminal’. However, my day was made by an early 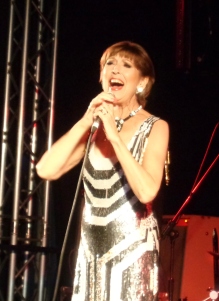 evening performance in the Champion Marquee.

Sixties’ actress and singer Anita Harris treated us to a variety of songs, including ‘Fly Me To The Moon’, ‘Memory’ and ‘All That Jazz’, plus a number of tales from her long showbiz career. For me, the highlight of the evening came when Anita told us how Dusty Springfield gifted her a song written by the late singer’s brother, Tom. That song was ‘Just Loving You’, a track I know word-for-word thanks to listening to my parents’ vinyl collection from a young age. I never thought I would one day get to see it performed live, so it was a very special moment for me, and one which proves how the diverse mix of music on offer at Looe Music Festival ensures there is more than something for everyone. I can’t wait to return next year.